Contributions to Biodiversity Conservation by Volunteers

On a rainy Saturday in September I join Marty, the ACT Parks and Conservation Service (PCS) ParkCare Ranger on what is fairly typical weekend day for him. His job is to facilitate and support the volunteer efforts of the ACT’s ParkCare groups in protecting and improving the reserves and parks of Canberra. There are around ~850 volunteers across at least 22 ParkCare groups in Canberra, many of which have a focus on a particular reserve.

ParkCare volunteers perform various tasks that protect and improve the biodiversity of the ACT’s reserved areas network including:

In the morning Marty and I are out in Parks 17 – a PCS bushfire tanker usually used in suppression of grass and forest fires – but today delivering water to small tanks dotted around The Pinnacle Nature Reserve. The cubes are used by the ParkCarers to water newly planted trees and shrubs during their first years to improve survival and establishment. Without these deliveries, water would need to be brought from the suburbs by buckets or bottles for each plant – a laborious and time consuming task. I climb up and down from the cab to open and close gates for Marty, saving him a little time as he does the rounds.

In the afternoon we are linking up with 22 ADFA Cadets to cut Cootamundra Wattle (Acacia baileyana, a native shrubs that is considered a weed in the ACT due to its invasive and highly competitive habit) on the southern flank of Black Mountain. These future officers of the Australian Defence Forces are here as part of their studies undertaking community service. Armed with an assortment of loppers and hand saws, they march a kilometre along a walking track to reach their area of operation. It’s a steep slope running down to Parkes Way, in an area beneath powerlines cleared of trees there is a patch of Cootamundra Wattle.

After a quick target identifications session, they’re off working in small groups they tackle the wattles. I am on the chainsaw (the only one other than Marty with appropriate training in its operation), moving between groups helping with larger weeds. The cadets move quickly across the slope and reach a gully marking the end of the target area, before turning back uphill and sweeping back towards the starting point. It’s all over very quickly and takes Marty a bit by surprise – either military efficiency or youthful enthusiasm has us finishing up early. 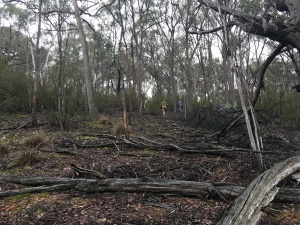 Finished up and hiking back up to the walking track

The number of ParkCare volunteers is far larger in number than the whole PCS workforce. The contribution these people make to conserving biodiversity in the ACT would be very difficult to replace. According to Australian Bureau of Statistics data, the average Australian gives around 2.2 hours per week. If this is multiplied by the number of ParkCare volunteers and number of weeks in a year, then divided by the usual weekly hours of a PCS employee it would equate to PCS needing to employ at least 52 Additional fulltime staff (or more if the time given exceeds the national average). The contribution of Volunteers to the health of Canberra’s reserves is not insubstantial and the work of ParkCare is irreplaceable.