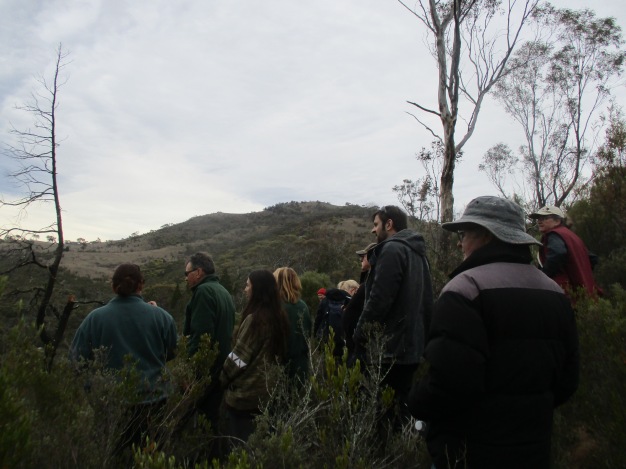 The Murrumbidgee River is the third largest water source of the Murray-Darling Basin. Despite being the main waterway for Canberra, the Basin’s largest population centre, and home to several endangered species, including Murray cod (Maccullochella peelii), and Murrumbidgee Bossiaea (Bossiaea grayi), the UMRC remains largely overlooked in national water policy. This makes the ParkCare volunteer work highly significant.

There is increasing recognition of the contribution conservation on private land makes to improving biodiversity. By working with private landholders this ParkCare group contributes to holistic conservation of contiguous  landscapes.

Cuppacumbalong,  formerly part of a 4000-acre sheep and cattle station, is located along the Murrumbidgee River, nestled between Namadgi National Park and Tharwa Bridge. Early work centred around restoring the homestead’s heritage listed gardens, and has since expanded into surrounding land, including farm dam restoration. Farm dams are ubiquitous throughout agricultural landscapes, and play a significant role in maintaining biodiversity in highly modified environments.

We helped restore Cuppacumbalong’s dam in late July by planting aquatic herbaceous perennials, mainly Cumbungi (Typha domingensis). This improves structural heterogeneity of dam vegetation, known to improve species richness.  Cumbungi also reduces water contamination from agricultural use, which is important given the sites history. This dam will act as a stepping stone within the surrounding fragmented agricultural landscape.

In mid-August Bernie’s team tackled the picnic area’s dense thickets of Poplar trees (Populus sp.). Deciduous invasive woody plants can change ecosystem function, for example disruption of natural nutrient cycles. However, they also fulfil similar roles to native species including erosion control and faunal habitat, for example the birds nest in a Poplar tree we were about to remove. This highlights the need for active restoration to fil gaps in riparian vegetation and subsequent disruption of ecosystem services that weed removal creates.

Volunteering on public and private land enables more holistic conservation. As Ranger Bernie (25/7/2019) states this ParkCare group helps ACT Parks and Conservation “do projects that we would otherwise never get around to”.

Restoration on small patches of private land, such as Cuppacumbalong, is a shift from Australia’s primary focus on large protected areas for managing biodiversity. ParkCare work at Cuppacumbalong shows how private land conservation complements public parks and protected areas by improving habitat connectivity and increasing the spatial extent of land under conservation.

Learning about the environment is one of the main reasons these volunteers get involved. As one volunteer expressed,

“I love it! It’s great to be out in the open and learn about the environment and history of the area”

This ParkCare group reminds us biodiversity conservation is a human process. Change requires widespread education and local environmental groups are a great place to start. Exchanges over homemade cake at morning tea, Ranger Bernie’s explanations, and  hands-on work all contribute to understanding the value of biodiversity and why it needs protection.

Find out how to get involved here!