Restoring remnant vegetation and reducing Biodiversity loss in farmland: The Agricultural Matrix in the Far South Coast of NSW

The Bega Valley on the Far South Coast of NSW is one of the most picturesque coastal regions in Australia, with far reaching coastlines mixed with rich and diverse National Parks, such as Biamanga, Ben Boyd and Bournda. 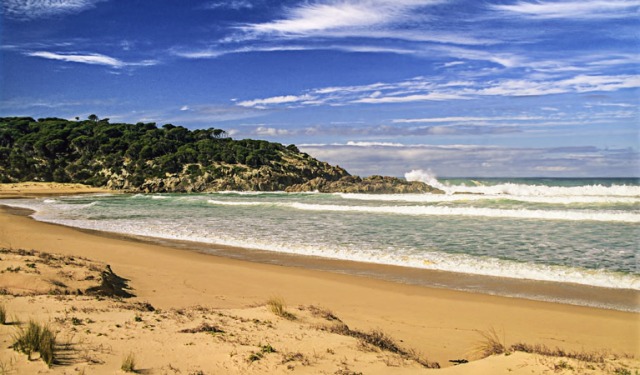 The area is as well well known for its agricultural produce, with Bega Cheese providing the largest employment for the region, with dairy farms all over the valley, combined with graziers and the odd horticulturalists. The spread of farming combined with the growing need for conservation in the valley has lead to increase in many programs and Government initiatives, from farm forestry, to nature corridors and restoring remnant vegetation.

The Bega Valley is a classic example of European settlement and agriculture techniques, with extensive land clearing and cultivation occurring from settlement through to the present day, which in turn has significantly affected the biodiversity in this region. The increase in protected areas and National Parks has seen greater concern for conservation over the latter parts of the 20th century, while this has improved species numbers and biodiversity, large patches of farmland created an agricultural matrix, and fragmentation for many species.

The concept of the agricultural Matrix aims to improve biodiversity in patches of land with separated regions of remnant vegetation. In many parts of Australia agriculture and its economic benefits outweigh conservation goals, leading to fragmentation. To reduce the impacts of biodiversity loss the clearing of natural vegetation for agriculture and the focus on increasing productivity on already converted land is seemingly the most positive method (Vandermeer and Perfecto 2006).

A conceptual model of a corridor system in an agricultural matrix (Barnes, 2001)

This however, is not enough, the importance of reconnecting the remaining vegetation patches through wildlife corridors and the restoration of paddocks and cropland to pre-agricultural floral conditions, to create new patches, in areas where existing patches are either too degraded or too small to suffice for the longevity of biodiversity.

The effects of erosion due to clearing in the Bega Valley

In a group of properties near the small country town of Candelo, the initiative sparked movement towards both farm forestry and Landcare, which is where I got involved with Landcare. The landscape of these properties, very similar to that across the Bega Valley, was large cleared, grazing and cropping land, with two rivers running through and with a hill dominated landscape. Exotic grasses including fireweed (Chamerion angustifolium) and Love-grass (Eragrostis curvula) along with feral introduced pest species such as rabbits, hares and foxes were the dominant ecological community.

Landscape on the farm prior to re-vegetation.

The farmers on these properties while all holding a progressive mindset towards biodiversity conservation also recognised the importance of maintain agricultural viability, and for each acre of land restored to remnant vegetation, an area was offset for farm forestry, through using both pine and native species.

Over 20,000 trees were planted across the 700 acres over a two-year period, with several large areas (several hectares) being solely dedicated remnant vegetation restoration. With aid of qualified farm foresters and Landcare volunteers as well as the farmers themselves, the areas were seeded with direct seeding and spread seeding.

The established goals were:

The trees that were selected for the initial stages were:

Over the 15 years since the first plantations were completed, the results have changed the landscape of the area completely. What was one bare hills with spread out mature trees on steep slopes and in river beds, there is now tree lines and well vegetated areas on all areas of the property, being both aesthetically and environmentally appealing.

The success of the species were mixed, with Forest red gum failing to grow on ridges, but successfully growing on slopes and the Yellow StringyBark providing seedlings in the understory to great effect. In some areas boron deficiency affected the upper crowns of the trees, but with use of fertiliser was fixed.

In areas where remnant vegetation restoration was prioritised there has been the most significant change, with hare and rabbit numbers, along with foxes, declining due to habitat change and culling, and the return of native birds and mammals. One farmer who has lived in the area for 60 years commented on the return of the White Winged Choughs (Corcorax melanorhamphos) which had been absent until the corridors and native vegetation had been restored. This also coincided with the return of the common wombat, which through the introduced corridors started moving more freely throughout the property, which also led on to unwanted agricultural impacts (dam collapses from wombat holes), but overall represented the increase in biodiversity through the property due to the introduction of the corridors and restoration of the remnant vegetation patches.

2 Responses to Restoring remnant vegetation and reducing Biodiversity loss in farmland: The Agricultural Matrix in the Far South Coast of NSW