In the past 3 years a heated up discussion has been going on in Brazil about the creation of a new National Environmental Law. Brazil holds a huge parcel of of the world’s natural areas, but it is of common knowledge that the management of this remnants is far away from being a model. So why aren’t things working? 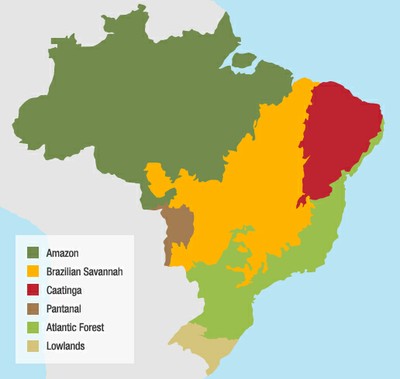 If we look back to the old National Environmental Law it was actually a good model. Brazil is a diverse country holding 6 major Biomes. Worried about the basic functions of the natural ecosystems, in the 30’s many scientists worked on the creation of a legislation that could be used countrywide. In 1965 it was modified into a more applicable version. This 1965 model was the one present until 2012 and had few modifications over time. Basically it established protection to the permanent protection areas (PPA) which are water springs, river basins and hilltops, and also legal reserves (LR) which are a percentage of the land with size dependant the Biome it is located (this areas cannot receive low cut but can still be used for wood management, non-timber products and other secondary uses). The legislation technically good technically and should prevented most of environmental abuses around the country.

The problem of this legislation, that is actually the reason why a new one was created, is that it was too broad. Several years of unsuccessful monitoring along with many changes caused a severe illegality situation around many big and small properties. In addition, the government monitoring system wouldn’t work properly failing to reach all areas and suffering from many cases of corruption.
The creation of a new National Environmental Law began trying to solve this problems, but it rapidly excluded the academy and became a political issue. Instead of adapting the law to different scenarios across the country the politicians though that lowering the demands would be the best solution. So the new legislation included, amnesty to those who cleared PPA before 2008, reduction of PPA and LR and permission for each state to lower it even more if they want to. Many scientists in Brazil have warned about the importance of having a legislation that represented the county’s ecosystem diversity. The studies to implement this model would demand a few years and a lot of patience, but taking in consideration the seriousness of this issue time shouldn’t be a problem.

After three years of political discussions the new Environmental Law was approved with many hollows favouring the powerful big landlords (sometimes politicians themselves), leaving small farmers in the same difficult situation and failing to provide minimum conditions for the conservation of many key natural areas.
As a part of the academy it is hard to be ignored in such an important issue. Brazil has the opportunity to innovate and come out with a complex but applicable legislation that agrees with the country’s size and diversity. But politicians have chosen a loose legislation to add everyone back to legality. This definitely characterises a national throwback. Brazil is one of the main actors in the world’s climate change discussion and is still a hostage of the rich minority’s will and demagogic speeches.

1 Response to Politics as usual