Enter the matrix: why and how policy makers need to start thinking about more than just nature reserves.

What if the ecological concept of “matrixes” was more than just a great opportunity for puns? What if Australia hits the IUCN target of 17% original vegetation only to create a costly, unrepresentative area of low quality national parks? What if that brush-tail possum living above your garage door and pillaging your veggies was actually an untapped subject for biodiversity conservation? 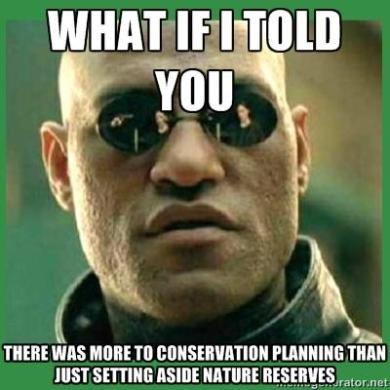 Perhaps the network of garages and crawlspaces on the urban fringe aren’t a conservationist’s treasure, but commonly and quietly you will hear exclaimed “90% of our natural assets are on private land!”. This seems to have been framed by policy makers as a symptom, an ailment of those pesky property rights and the unhelpful (?) farmers that own great swaths of our country. It is costly (both in money and time) to purchase and convert private land into those official and hopefully effective national parks.

The alternative? Consider the matrix in conservation planning as equally as you would consider a reserve.

There needs to be more innovation and alternative ways of conserving land. What about letting the people that live around or own the matrix to look after it? Already there’s been an emergence of offsets and bio-banking, but to my knowledge this doesn’t contribute a national “Matrix plan”. There are grant programs available, but not targeted in a cohesive biodiversity scheme- something tangible that people can engage with.

And the best part…beyond the initial costs of education and engagement with governmental/scientific organisations, the landholder could care for and monitor the landscape for a hundredth of the cost of a reserve.

Some habitats may be easier for citizens to conserve than others. In our studies on Box gum grassy woodlands (highly cleared and endangered!) there are simple measures to endorse biodiversity. Farmers can graze there.What is evident is that there are no pathways to allow this to happen. Take a local farmer at Gold Creek station as an example. He wants to manage the biodiversity on his land but isn’t recognised. Shouldn’t this be easier?
http://m.canberratimes.com.au/act-news/moves-on-the-fringe-to-stop-the-sprawl-20130315-2g6lb.html)

Developers too have the potential to facilitate a suburban matrix. Googong township is one close to my area that I am keeping a particularly close eye on, despite looking like nothing more than a building site stripped of topsoil at the moment.
http://googong.net/sustainability/parklands.php.
Perhaps legislative change wasn’t even necessary in this case? The effectiveness remains to be seen.

I don’t want to say “Everyone on board the new discipline of conservation outside of reserves! Abandon reserves! Innovation! Buzzwords!”. But it seems frustrating that unreserved and perfectly good land in the matrix remains unmanaged for biodiversity purposes. If conservation planners could take this approach they might be able to imagine a connected and effective place for wildlife on agricultural, even suburban, land.

Don’t get me wrong, reserves are still important as an intensive area for conservation. They’re also already more flexible than they’ve been in the past (compare Yellowstone vs. The Lakes District for an example), but it is a big commitment to create a reserve and some areas will always miss out.

Essentially land need not be zoned as exclusive to biodiversity, and then everything else as the matrix. I say nurture a culture where biodiversity can be acknowledged and stewarded without being in a reserve.

2 Responses to Enter the matrix: why and how policy makers need to start thinking about more than just nature reserves.